SAP was founded in Germany in 1972 as a business applications company. The vendor now employs more than 107,000 people worldwide and has a turnover of €27.84 bn. SAP is one of the largest busi-ness software vendors in the world.

The vendor’s data and analytics portfolio is based on the strategic SAP Business Technology Platform (BTP), which provides cloud-based data, analytics, application integration and extension services across all SAP products. The platform is technologically built on SAP HANA Cloud, a modernized cloud-based version of SAP HANA, the vendor’s in-memory database.
Although the vendor focuses on cloud, its current front-end analytics portfolio encompasses cloud-based and on-premises solutions for business intelligence, augmented and predictive analytics, as well as planning. For BI and analytics, the cloud-based SAP Analytics Cloud and the on-premises SAP BusinessObjects BI are the core offerings. Predictive analytics functionality for business users is covered in SAP Analytics Cloud while more extensive functions for data science are made available in SAP BTP.

SAP Analytics Cloud is SAP’s strategic cloud analytics offering. It combines analytics capabilities such as data discovery and visualization, enterprise planning and augmented analytics into an integrated all-in-one offering. The SAP BusinessObjects (BO) Business Intelligence (BI) Suite (SAP BO BI) is part of SAP’s on-premises BI portfolio, which incorporates various end-user business intelligence tools with a moderate level of integration. The suite contains a few strong individual products for reporting as well as several clients for various types of analysis. It also offers good capabilities for building customized guided BI applications that can be published to the web or mobile devices.
SAP has set BusinessObjects BI – including all related components (SAP Crystal Reports, SAP BusinessObjects Web Intelligence, SAP Analysis for Microsoft Office and SAP Lumira) – on maintenance by ensuring support (for version 4.3) until 2027 (or extended support until 2030). However, in 2022, SAP published a new statement of direction paper that shed a slightly confusing light on the future of the suite. While confirming the maintenance dates above, SAP also announced plans to release a SAP BO BI 2024 platform but failed to specify its maintenance timeline. The vendor also intends to modernize and add new features to the Web Intelligence component.

The SAP BO BI platform consists of several different products. In this year’s survey, almost half of the responses were from SAP Analysis for Office users (46 percent) and 33 percent came from Web Intelligence users. This is reflected in the typical usage scenarios: 94 percent use the suite for reporting and 85 percent for ad hoc query. Also, a high rate of usage was reported for tasks performed by business users, such as analyzing/exploring data and creating reports.
The list of rival solutions evaluated in competition with SAP BO BI reveals one of its weaknesses: the lack of a mature business-user-oriented data discovery solution. SAP Analytics Cloud (SAC) is the vendor’s recommended product for data discovery tasks. It is interesting that no other SAP products are listed here, with SAC being especially conspicuous by its absence. Detailed data shows that many of the implementations in question date back more than 2 years, which would explain why only a small portion of customers considered SAC as a direct competitor to SAP BO BI. At that time, they were seen as complementary solutions.
The suite is mostly used by large companies with a mean of 5,000 and a median of 20,611 employees. Customers typically work with large data sets (1,435 GB on average). The median number of users is moderate at 150, but the mean of 1,155 clearly indicates that there are much larger implementations out there. Although typical user numbers are high, the percentage of employees using the product is rather low at 11 percent (mean) and 5 percent (median). This shows that the solution is likely used in specific departments rather than company-wide in most cases. Almost every SAP BO BI customer has used the product in the finance department (94 percent). Other departments that have made significant use of SAP BO BI include sales (77 percent) and IT (67 percent). Only 65 percent have used the solution in management. 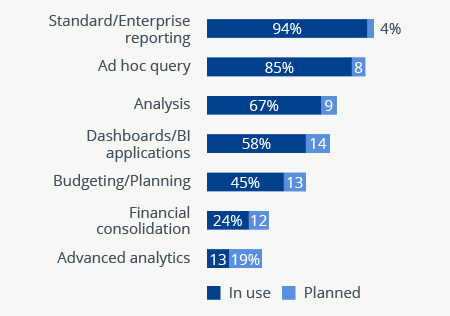 5 products most often evaluated in competition with SAP BO BI 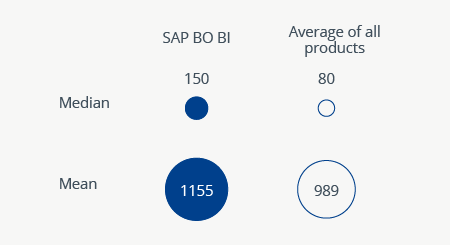 Tasks carried out with SAP BO BI by business users 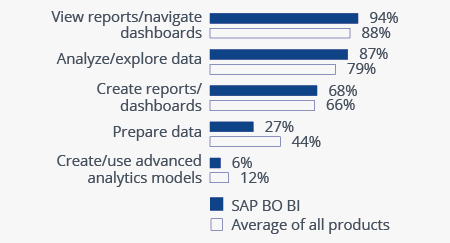