Report One is a privately held French BI software company with approximately 95 employees and 5,000 customers. Since its foundation in 2001, which was also the year its BI product MyReport was first released, Report One has expanded its presence to four offices spread across France.

The vendor’s current focus is primarily on the French market. 220 Value-added resellers (VARs) support Report One by distributing MyReport, mainly in France. The majority of sales and implementations are done by Report One’s partners.
Report One focuses on small and medium-sized businesses (SMB). The vendor claims that these organizations cannot afford the mostly expensive and technically complex software which often requires a great deal of IT-oriented resources to administer. Therefore, the vendor has sought to build an affordable and easy-to-use software which requires no code development and gives business users the ability to create BI content from ETL to reporting and dashboarding.

Report One’s MyReport is a BI solution integrated in the familiar Microsoft Excel spreadsheet environment and comes with a web portal-based dashboarding module for distributing dynamic data to multiple users. The product’s philosophy is to enhance the analytical capabilities of Microsoft Excel and promote the reuse of data to spread controlled information across the organization. Report One aims to help its customers to be more efficient at every step, from the integration of enterprise data all the way through to the consumption of reports, dashboards and analyses.
Report One primarily addresses CEOs, CFOs, HR departments, sales managers and IT managers. Besides its Excel-oriented reporting, dashboarding and analysis functionality, the software offers an ETL module as well as data preparation features. The business-user-friendly software is designed to avoid scripting, regardless of business function, user type or use case. According to the vendor, users do not need scripting for data integration and preparation, or for calculating measures, designing reports and building visualizations. Report One attaches great importance to progress and in enhancing the software. One focus area is the development of the web client, which offers a responsive interface for data visualization and dashboarding requirements.
Report One pursues a simple and flexible license offering. Customers can either choose to buy licenses and pay an extra fee for maintenance or they can rent the software for an annual fee including maintenance costs. ‘Manager’ – the main type of full user license – covers a range of different user requirements. Access licences through Excel and the Web are also available (Viewer or Center). The Server license, which is required for data integration and sharing, is also charged either at a non-recurring or rental fee.

Report One’s two distinct software modules are reflected in the two main use cases reported by users: standard reporting (implemented by 94 percent of respondents) and dashboards (94 percent). An emphasis on business users is reflected by above-average usage for report and dashboard creation by business users (81 percent compared to 66 percent on average) as well as slightly above-average usage for data preparation (48 percent vs. 44 percent on average).
Report One’s main competitor is Microsoft, the vendor of MyReport’s reporting environment foundation. A high competitive win rate shows that Report One is able to convey its strengths in terms of functionality and ease of use, which are perfectly incorporated into a solution fit for SMBs. However, customer quotes paint an alarming picture with many users complaining about MyReport’s graphical capabilities, formatting options and licensing. Many of these negative quotes directly refer to Power BI as an alternative solution. It seems that Report One needs to speed up its modernization to keep up with the competition.
Report One is a local vendor on the French market. All of the MyReport users taking part in this survey came from France. The vendor targets the SMB sector, represented by 39 percent of our sample. Although the majority of respondents are from mid-sized companies (55 percent), the median number of employees in companies using MyReport is 150. 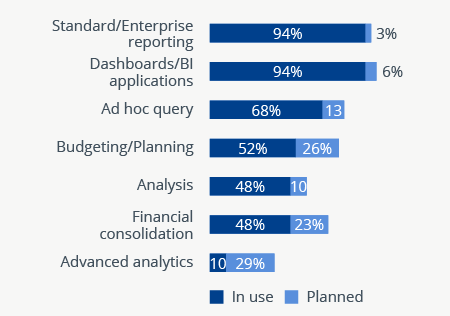 5 products most often evaluated in competition with Report One

Percentage of employees using Report One

Number of users using Report One 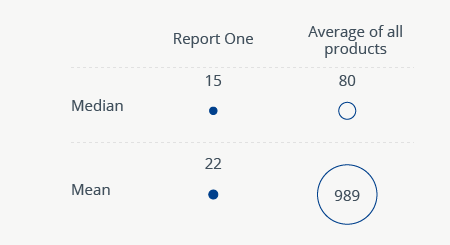 Tasks carried out with Report One by business users 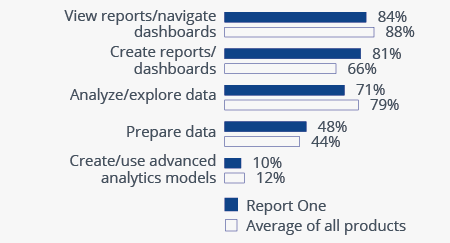 BARC’s Vendor Performance Summary contains an overview of The BI Survey results based on feedback from Report One users, accompanied by expert analyst commentary.