Qlik, originally founded in 1993 in Lund, Sweden, moved its headquarters to the United States in 2005 after raising funds from several venture capital firms. It was acquired by the current owner – private equity company Thoma Bravo – in 2016.

Qlik offers a compelling portfolio of end-to-end platform-based solutions for analytics and data management. In the area of data management, the vendor offers a number of services for data ingestion and transformation, catalog features and automation services.
QlikView was the vendor’s first analytics product and the tool it became famous with. It is a dashboard and analysis product that made in-memory technology in analytics and BI widely popular. The QIX engine still delivers exceptional performance for highly responsive analyses and interactive dashboards. QlikView was the first tool marketed under the ‘data discovery’ and ‘modern BI’ terms to differentiate it from established BI suites. It was positioned as a self-service tool targeted at business users, enabling them to analyze data without having to consult developers for new reports, dashboards or analyses on new data sets.
QlikView is still in use at many organizations but no longer actively marketed to new customers. To ensure compatibility, at least one QlikView release per year is provided with improvements ranging from technical health to integration in the Qlik portfolio. QlikView applications can be run in Qlik Sense, which makes migrations much easier, especially if dealing with large implementations.
QlikView was originally developed as a desktop solution with a Windows client (QlikView Desktop). It can still be used this way, and often is, but Qlik has moved away from the desktop to a web-based architecture (QlikView Server). QlikView Desktop is used for data preparation (extract, transform, load) as well as for building applications. A core strength of QlikView Desktop is that it seamlessly combines content consumption and creation in a single mode. This makes the software very flexible to analyze data, and enrich and reshape it for further inquiries. QlikView applications (‘apps’) can be hosted on the web as guided apps (e.g., dashboards or analytical applications) or delivered as complete apps with the data to users who use the local client to access server-based apps.
The QlikView Publisher component is used to handle data reloads and the distribution of QlikView apps to users. Qlik NPrinting (additionally priced product) provides centralized report creation and distribution using data and visualizations from QlikView.

QlikView is put to a broad range of uses by its customers. Most use the software for interactive dashboards and analytics applications (89 percent), which is what the software was built and marketed for. In addition, 85 percent use it for standardized enterprise reporting and 69 percent for ad hoc query. 63 percent of customers use the solution to analyze data.
QlikView’s powerful interactive dashboards are often used to analyze data in every detail. 75 percent of business users analyze and explore data with the tool. Most users consume standardized content such as reports and dashboards to access information quickly. Below-average shares of users creating content and preparing data show that QlikView is no longer considered as easy to use as competing products.
The solution’s focus on dashboards and visual analysis often places it in competition with the vendor’s own Qlik Sense, Power BI and Tableau.
QlikView is mostly used in mid-sized (63 percent) and large companies (29 percent). It has a median of 100 users, which is above the survey average. The mean value of 454 users shows that much larger customer scenarios are supported too. 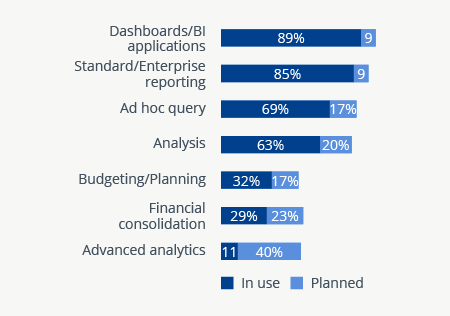 5 products most often evaluated in competition with QlikView 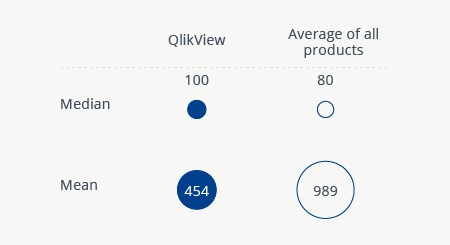 Tasks carried out with QlikView by business users 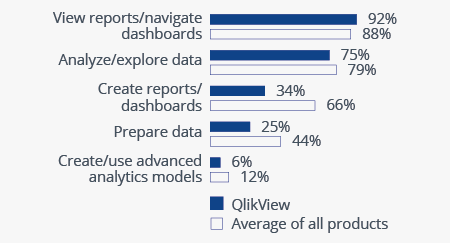 BARC’s Vendor Performance Summary contains an overview of The BI Survey results based on feedback from QlikView users, accompanied by expert analyst commentary.