Founded in 2009, Pyramid Analytics is a privately held software company with more than 200 employees. Its first BI and analytics product, BI Office, was launched in 2012. The company is headquartered in the Netherlands and has offices in the United States, Israel and the United Kingdom. It continues to grow and now supports more than 3,500 enterprise customers.

Pyramid combines data preparation, data discovery, dashboards, machine learning, advanced analytics and formatted reports into a unified enterprise BI and analytics platform. It was designed from inception to bridge the gap between self-service and IT-driven BI and analytics, providing agility for decentralized business users while retaining centralized monitoring and control. This fosters enterprise-wide collaboration through the sharing of business logic and content. Recently, the company has invested heavily in enterprise-grade features and capabilities, including adaptive user experiences that accommodate all skill levels, enhanced data preparation, augmented analytics and certified SAP connectors.
The vendor puts an emphasis on Pyramid as an open and agnostic web-based platform. Its open architecture means the software can be deployed in different environments: cloud, hybrid or on-premises. Moreover, Pyramid is device and operating system agnostic with full gesture support on touchscreen and mobile devices. It also supports REST API to cater for scenarios such as embedding and automation. Pyramid’s analytics engine, ‘PYRANA’, drives both querying and analytic calculations across different data sources using ANSI SQL or MDX – which enables fast in-place analytics on large data sets. This extends direct analysis to numerous relational, in-memory, big data and unstructured data sources natively – including Pyramid’s own proprietary in-memory engine. Pyramid now extends certified support to various SAP data sources, making it a viable alternative to leverage data from, for example, BW/4HANA without duplicating it.
Pyramid offers improved data preparation and modeling features to support data integration and pro-cessing. For AI and machine learning, the vendor offers sophisticated R, Python, MLib, Weka and Ten-sorFlow integrations. The vendor pursues its own approach when investing in NLQ capabilities with the goal of offering fast search-based analytics on all data sources without indexing all the data upfront. Au-tomated insights (‘Smart Insights’) leverage NLG to explain basic facts, relationships, forecasts and other findings when applied to visuals or query results.

Pyramid serves a broad range of user requirements. The product is mostly used for enterprise reporting, dashboards, ad hoc query and analyses. Besides having predefined content available to them, Pyramid users from business departments seem to be quite active content creators, analyzing data and visualizing it in reports and dashboards.
Advanced analytics functionality is used by 28 percent of respondents. However, an impressive 66 percent plan to invest in this trending area. Pyramid offers native integration of R and Python into the data flows of the product, as well as allowing users to incorporate third-party plug-ins and libraries. This support of advanced analytics is a differentiating factor for Pyramid.
Around 80 percent of this year’s respondents came from mid-sized and large enterprises with a median of 80 users. The mean of 1,116 users shows that there are already a number of larger deployments out there. The median number of employees working for Pyramid customers is 3,000 this year. These customers are distributed globally: 55 percent of survey respondents came from Europe (well distributed across several regions), 31 percent from North America and 7 percent apiece from APAC and the rest of the world. 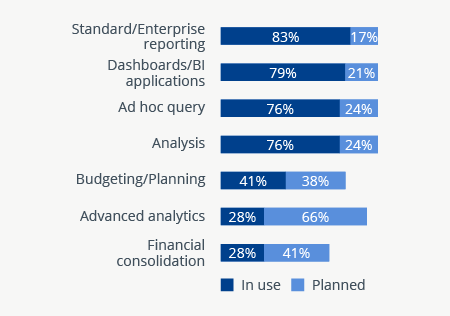 5 products most often evaluated in competition with Pyramid 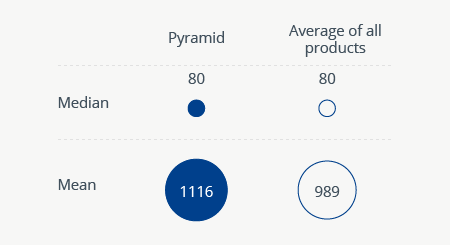 Tasks carried out with Pyramid by business users 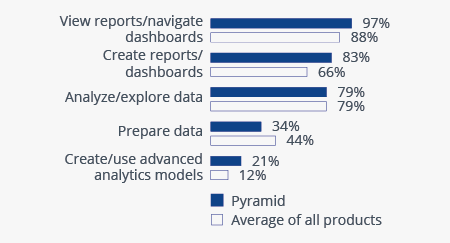 BARC’s Vendor Performance Summary contains an overview of The BI Survey results based on feedback from Pyramid users, accompanied by expert analyst commentary.