Who Manages and Governs Data for Decision-Making?

In earlier articles, we have seen that 68% of respondents believe that information will be highly valued for decision-making in the future, but that deficiencies in the availability of information and data quality are major inhibitors to using information.

Since decisions based on information can only be as good as the underlying data, it is crucial that companies implement effective data governance. Someone has to take charge of data governance. We asked our survey panel to identify the people managing and governing data for decision-making in their organizations.

Who manages and governs data for decision-making? (n=726)

Several departments are involved in managing and governing data but, more often than not, the finance department is responsible, followed by IT and BI Competency Centers (cross-departmental groups).

The success of an organization is usually measured in financial terms so the finance department naturally tends to be heavily involved in defining and measuring success. For this reason, it is no surprise to see the finance department being cited by 60% as playing a prominent role in data management and governance.

While some technical input is important for data management and governance, the IT department should not manage and govern data on its own. Instead, a business function (such as finance) or a cross-departmental group (such as a BICC) should take the lead.

41% said that IT departments manage and govern data although only 10% said that the IT department alone is responsible for this. We would be concerned if the latter figure were any higher.

Cross-departmental alignment is crucial to successful data management and governance. BICCs are cross-departmental by definition and, in organizations in which BICCs are in place, it is important that they play a major role in this area. 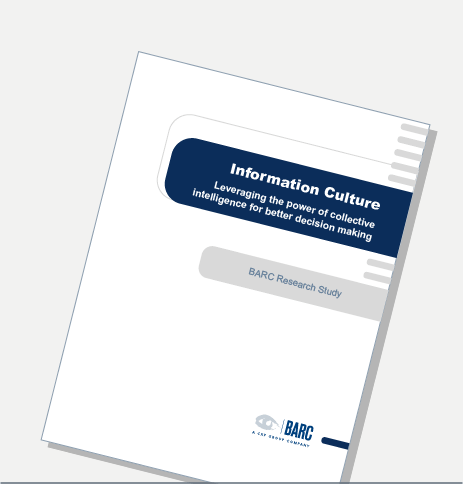 Leveraging the power of collective intelligence for better decision making