[The Data Management Survey 19 results, not included in Data Management Survey 20] SAP was founded in 1972 as a business applications company but really came into prominence in the 1990s with the ERP boom. Its ERP solution (R/3) was first released in 1992. The vendor employs more than 98,000 people worldwide and has a turnover of € 24.74 bn. Today, SAP is one of the largest business software vendors in the world.

SAP’s original strategy was to view BI as an extension of its all-inclusive ERP offerings. Therefore, SAP launched SAP Business Warehouse (BW) in 1998, a completely packaged and plug-and-play BI solution designed to complement SAP ERP applications. BW is a package consisting of connectors, relational data storage, subject-oriented multidimensional structured data marts and predefined content as well as tools for reporting, analysis and planning. The goal was to provide a plug-and-play BI solution that would make it fast and easy for SAP customers to benefit from BI.

There are different versions of BW available. Traditional BW runs on a standard relational database, but customers can purchase redesigned versions for SAP HANA. From an architectural perspective, there are two variants: standard relational database or SAP HANA. The first version uses well known third-party databases such as Microsoft SQL Server or Oracle for data storage. The “powered by SAP HANA” version uses SAP’s own HANA platform. SAP BW/4HANA will only run on SAP HANA. It uses different modeling objects with modeling taking place in HANA Studio (SAP HANA’s development environment) instead of the SAP GUI (the BW development environment).

With BW/4HANA, SAP released its next generation data warehousing offering in 2016. The overall concept and goal of this package remains similar to the approach with BW: to provide software support for customers to integrate SAP operational data sources with big data sources and create a data warehouse which exposes its data to different front ends. In contrast to BW, the new BW/4HANA solution does not include front-end tools anymore. Now, SAP is working on a Cloud-based version of the SAP BW, known as Blueberry. The following description refers to the traditional BW modeling objects.

Data is usually loaded into BW using a staging process, although it is not restricted to loading data from other SAP applications. BW can load data from flat files, generic relational database tables or directly from other vendors’ applications. BW obviously has excellent access to both the metadata and the data in SAP standard (non-customized) operational applications, provided by pre-built extractors that can manage the whole process. SAP Business Content ships with pre-configured extractors for SAP applications. These are among the most important reasons why SAP ERP sites also deploy BW.

There have been many modeling objects in previous versions of BW including InfoProvider, MultiProvider, InfoCube, InfoObject, InfoSet and ODS. In the newer versions (powered by HANA), SAP has started to reduce the number available and introduce other types of objects. In all variants, an InfoQuery is used to query the InfoCubes and “flatten” the results of a query to a table, which can then be used as a data source for reporting tools. It is also possible to incorporate additional logic into queries and, for instance, define new formulas to calculate derived ‘key figures’ (measures). This BW Query concept remains the same with BW/4HANA.

68 percent of SAP BW customers are large-sized, 32 percent come from medium-sized companies. With regard to these figures, the importance of SAP BW as an ‘enterprise data warehouse’ is gaining importance, given that the company size usually scales with the functional scope and size of the data warehouse environment. 68 percent of users see SAP BW as an enterprise data warehouse. That’s something we can confirm from our practical experience. 58 percent of participants use SAP BW for data modelling. This is a comparatively high rating compared to the other, non-SAP technologies in The Data Management Survey 19. However, the result was to be expected. SAP BW allows users to deploy convenient functions and (predefined) content for data modelling. While the use of SAP BW for data integration tasks, data warehouse automation and the creation of data marts is still catchy, we are a little surprised that at least one in four uses SAP BW for data preparation. Data preparation refers to an iterative process that supports business analysts in preparing data for explorative analysis. A possible interpretation could be that BEx Analyzer is seen as a component of SAP BW for analyses and it’s also used for data preparation purposes. Data preparation functions in SAP BW are at least not known to us. 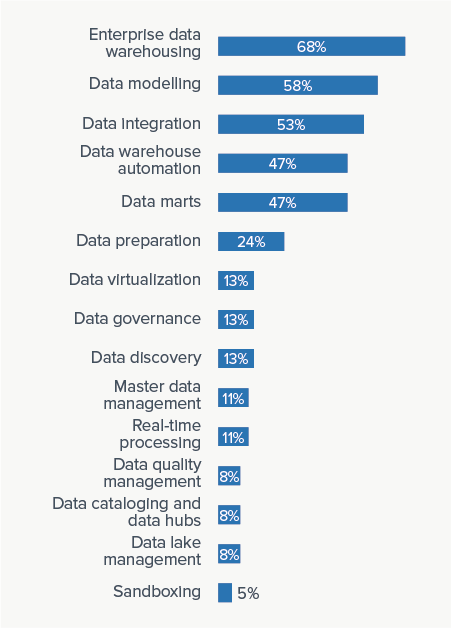 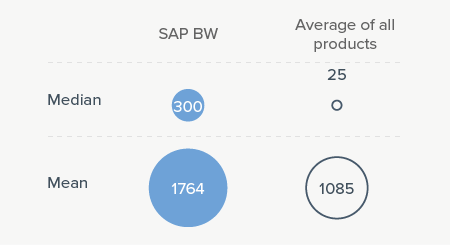