[The BI Survey 19 results, not included in The BI & Analytics Survey 21] InfoFabrik offers BI specific consulting services for the financial sector including data warehousing, the development of KPI systems and reporting infrastructure. In 2013, the company began implementing its own BI software called ReportServer. ReportServer supports the deployment of formatted reports from
different report engines as well as ad hoc and OLAP analyses. The aim of the vendor is to meet
dedicated, recurring information needs with standardized reports provided to a variety of different users. With its cost effective licensing and openness towards scripting APIs, the product is suitable for companies of any size with static and recurring information requirements as well as for those with specific needs that require customization.

InfoFabrik was initially founded in 2005 as mks-InfoFabrik GmbH and merged into InfoFabrik GmbH in 2016 following a partnership with the current managing directors. InfoFabrik employs 15 people at three offices in Germany. Five employees are responsible for the development of ReportServer, which is strongly oriented towards the needs and requirements of customers. ReportServer is available both as an open source community version and as an enterprise edition, which, according to the vendor, is used by approximately 200 customers.

ReportServer was originally developed to meet a specific customer requirement that could not be solved solely by open source software. With the idea that other companies could also benefit from the solution, InfoFabrik decided to make the software available to a broader audience. In 2013, the first public version of ReportServer was released. ReportServer acts as an access point to various open source reporting and OLAP engines and offers additional capabilities for ad hoc reporting via an in-house developed feature called dynamic list. The software also includes scripting capabilities for IT savvy users which gives additional flexibility and expandability.

InfoFabrik’s two business segments (consulting and software development) have created two different customer groups for the BI product. One cluster consists of customers who order ReportServer online and thus have minimal contact with the vendor. The other group is formed by consulting customers who benefit from premium support and consulting services provided by the vendor.

ReportServer enterprise edition is distributed through both InfoFabrik’s consulting services and the vendor’s online activities. ReportServer customers who primarily take advantage of InfoFabrik’s consulting services benefit from support and assistance in implementing and customizing the tool. For this special treatment, the vendor charges an extra fee, which does not apply to ‘ReportServer-only’ customers. While the community edition is free of charge, the enterprise edition is competitively priced. The typical customer begins with the community edition and evolves into an enterprise customer.

Over 90 percent of customers use ReportServer to fulfill standard reporting requirements. A similar percentage of customers leverages ad hoc reporting use cases with the product. Dashboarding and analysis are scheduled to be expanded on both the vendor and customer sides and are currently used by fewer customers than the aforementioned primary usage scenarios.

A median of 50 people per customer company use ReportServer, which is good for a vendor whose largest target group is small to medium-sized enterprises. In addition, the product seems to have a good adoption rate among its customers. 28 percent of employees use ReportServer in their organization, which is 10 percent above the average. The licensing of the product, which does not scale by the number of users, might be a reason for the high user rate. 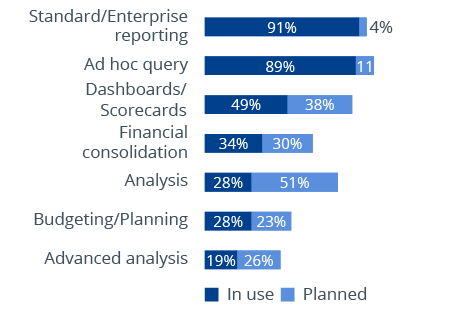 5 products most often evaluated in competition with ReportServer 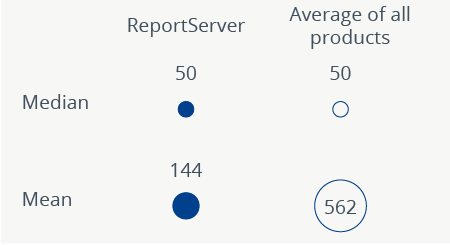 Tasks carried out with ReportServer by business users 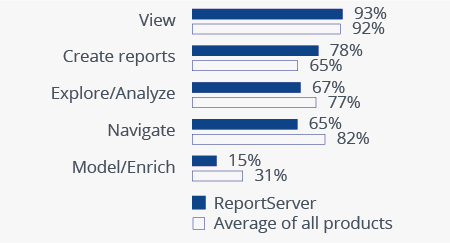 BARC’s Vendor Performance Summary contains an overview of The BI Survey results based on feedback from ReportServer users, accompanied by expert analyst commentary.