Qlik, originally founded in 1993 in Lund, Sweden, moved its headquarters to the United States in 2005 after raising funds from several venture capital firms. QlikView, the company’s only product at the time, was very aggressively marketed after the VC investment. This created attention and traction, and in 2010 Qlik went public on NASDAQ. In 2016, Qlik was acquired by a private equity company and delisted from the stock exchange.

Qlik was a one-product company until the general availability of Qlik Sense in 2014. Today, the vendor provides a portfolio of data management and analytics offerings. With this stack, Qlik focuses on helping customers manage their data, providing analytics to analyze the data, and features to transport insights to end users.

Qlik Sense is a visual analysis and dashboarding product based on Qlik’s own in-memory technology. It is particularly suitable for interactive, visual and set-oriented analysis as well as dashboard and application design. In general, it addresses a mixture of use cases from self-service data visualization to building guided analytical apps to embedded analytics. It covers analysis, dashboard and report creation and is strongly focused on business analysts and casual business users.

Qlik’s platform consists of several components including Qlik Sense, Qlik Core for developers, QlikView and Qlik NPrinting, for enhanced printing and page-based layout. Qlik DataMarket is a marketplace for sourcing external data for analyses such as weather and currency information. In 2017 Qlik acquired Idevio, now called Qlik GeoAnalytics, to provide enhanced spatial analysis. The vendor has also strengthened its data management offering. Qlik Data Catalyst, formerly Podium Data, was acquired to broaden its feature set for data preparation and data catalogs. This was followed in 2019 by the acquisition of Attunity, a real-time data integration specialist.

Qlik Sense is used quite broadly by customers. Most respondents (93 percent) use the software for its core strength: creating interactive dashboards. In addition, 87 percent of customers use it for enterprise reporting and 78 percent for ad hoc query. 74 percent of customers use the solution for analysis. Most users navigate and explore content provided by other users because only 45 percent claim to create reports with the software. 35 percent of users model and enrich data using Qlik Sense, which is slightly above the survey average of 32 percent. The solution’s characterization as a visual analysis solution geared to business users is also highlighted by the two most frequently evaluated competitors: Microsoft Power BI and Tableau. Roughly equal shares of the Qlik Sense users in this year’s survey came from mid-sized companies (45 percent) and large companies (46 percent). Qlik Sense has a mean of 1,161 users and a median of 101 users, both slightly above average. 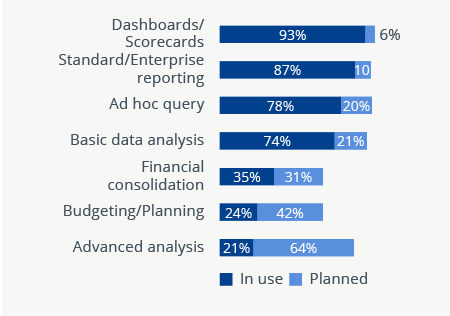 5 products most often evaluated in competition with Qlik Sense 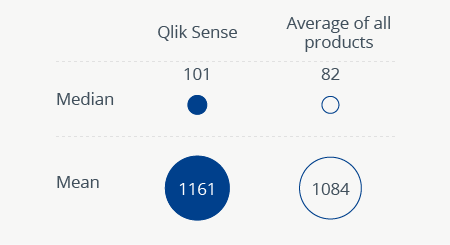 Tasks carried out with Qlik Sense by business users 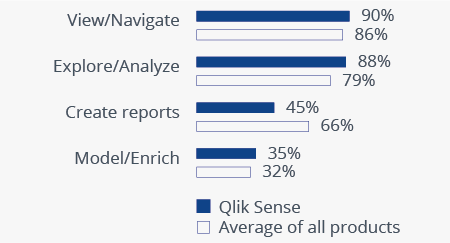 Qlik Sense offers customers fast query performance and innovative features to implement leading edge use cases. The modern platform with its strong query engine shines in many areas. Qlik Sense’s ‘Analyses’ functions are top-ranked in two peer groups while it is also top-ranked in other functional areas such as ‘Dashboards’ and ‘Data Preparation’. This broad range of sophisticated capabilities is the foundation for exceptional results in categories such as ‘Business benefits’, ‘Business value’, ‘Product satisfaction’, ‘Recommendation’ and ‘Competitiveness’. 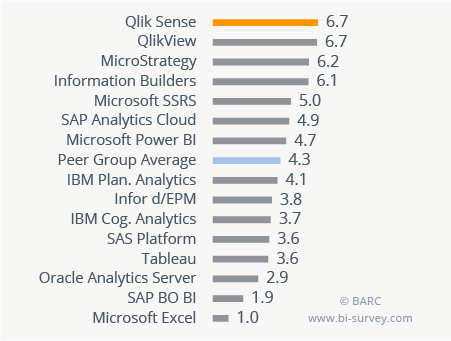 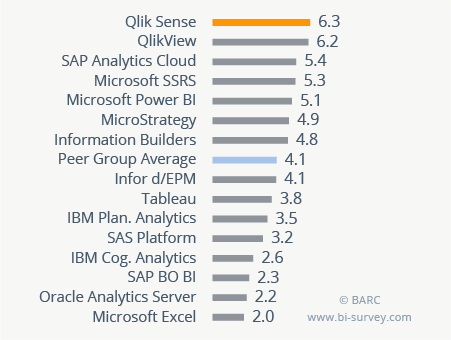 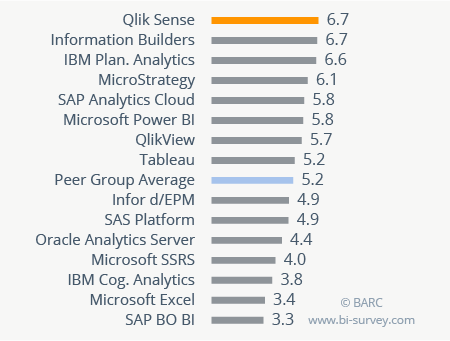 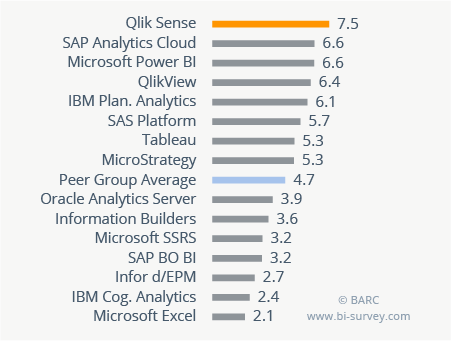 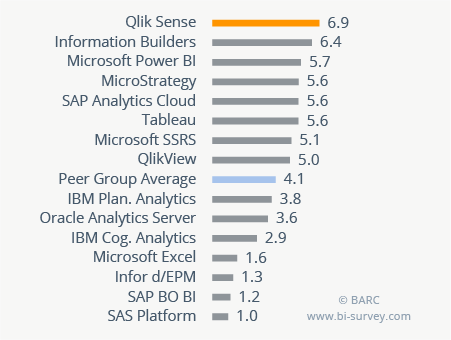 Go here to get a free trial version of Qlik Sense:

The best visual analytics software right now. No other tool makes it so easy to find hidden insights and answer questions that you didn’t even know you had

Love it! I have been in business improvement and used multiple BI products to produce my business reporting – this is the most agile and cost-effective product available.

The best business intelligence solution I have used. You can learn to use the software and create dashboards very quickly. Adding your own data sources and the insights you can gain with the software are ingenious.

It’s an analyst/developer’s best friend because you can use it for anything, analyzing data, transforming data, pushing data, mining and so forth. … As a company they lead the way in data literacy.

Person responsible/Project manager for BI/analytics from IT department , retail/wholesale/trade, 100-2,500 employees

Go ahead and buy it. It is a life saver.

Person responsible/Project manager for BI/analytics from IT department , education, 100-2,500 employees