IBM® Cognos® Analytics with Watson (Cognos Analytics, CA) is a web-based product for formatted reporting, dashboards, ad hoc reporting and analysis. It is based on a central end-to-end platform for administration, data preparation and modeling. Data modeling (and data preparation) for business users has become a central capability of the Cognos Analytics platform, which is a clear shift from the former developer-oriented Framework Manager.

IBM® is one of the world’s largest vendors of IT hardware, software and services. The company has a global workforce of approximately 350,000 employees and is active in over 170 countries. In 2007, IBM purchased the software vendor Cognos to become the center of its future analytics product portfolio.

Cognos Analytics is IBM’s analytics solution and combines ease of use with elaborate governance fea-tures in an end-to-end platform. The product is typically used in larger scenarios supporting the needs of many concurrent users as well as large data volumes. Cognos Analytics provides functionality for dashboards, pixel-perfect reporting, stories, data modeling and analysis in a web-based, integrated user experience. On top of that, the solution offers search-based analysis (NLQ) with encapsulated cognitive capabilities aimed at business users. IBM has extended Cognos Analytics in the area of advanced analytics. For instance, Jupyter Notebooks has been incorporated in the user interface to provide greater flexibility in data preparation and statistical analysis.

All customers use IBM Cognos Analytics for standard and enterprise reporting and almost all for ad hoc query (97 percent). Dashboards together with analytics applications (81 percent) are followed by analysis (68 percent). Although the competitors evaluated with the suite are strongly business oriented and customers seem to have put a particular emphasis on that during the evaluation the tasks performed by business users of IBM CA show a rather traditional BI picture. The ad hoc creation of content, data analysis and preparation lie all below surveys average.

IBM Cognos Analytics targets large corporations and mid-sized companies across all industries. 55 percent of our sample of IBM Cognos Analytics customers come from large companies (2,500+ employees). A median of 250 users and a mean of 1,160 users show that there are many large-scale implementations. 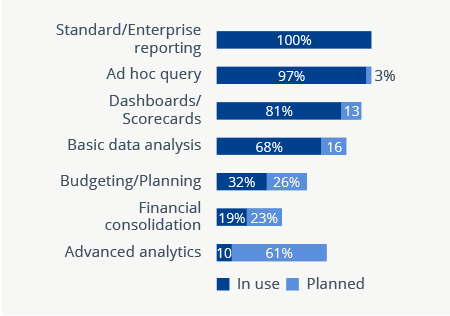 5 products most often evaluated in competition with IBM Cognos Analytics 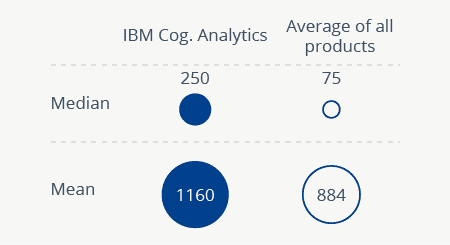 Tasks carried out with IBM Cognos Analytics by business users 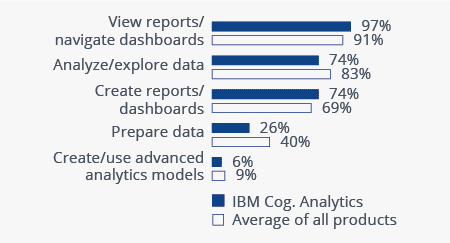