[The BI & Analytics Survey 22 results, not included in The BI & Analytics Survey 23] CALUMO offers a BI, analytics and CPM application that gives organizations a platform to create and deliver reporting and business planning models. The primary content authoring environment for CALUMO is Excel. Once the CALUMO add-in is installed, users can create spreadsheets, charts and dashboards in Excel and publish them to the web via features appearing on Excel’s ribbon menu.

Founded in 1996, Australian-based CALUMO employs 40-50 people in its headquarters in Sydney, Oceania and the United States. Most of the employees, including the research and development team, are based in Sydney. Since July 2021, CALUMO has been part of insightsoftware, a 1,000-person organization providing finance software solutions for the office of the CFO with over 28,000 customers worldwide.

Originally, CALUMO started out as a reseller of IBM Cognos TM1 (now IBM Planning Analytics). Its product, which is also named CALUMO, was first developed as an application layer to TM1. However, since 2005, Microsoft SQL Server has been used as the engine behind CALUMO.

CALUMO brings efficiency to financial budgeting and forecasting processes by enabling users to securely collaborate on content that normally exists in dozens of Excel workbooks.

The vendor targets business users in finance and accounting departments in medium to large organizations. It has no specific industry focus. CALUMO is typically deployed as a centralized application and is a flexible development environment for BI, analytics and CPM. The primary content authoring environment is Excel, where users can create content and publish it to the web. On the web, CALUMO enables authorized users to edit and enter data.

Based on Microsoft Excel as a front end, Microsoft SQL Server as a database and Microsoft Internet Information Services (IIS) technology, CALUMO is available in the cloud or companies can choose to deploy it on-premises, operating and using their own infrastructure. The company is a Gold level Microsoft partner.

Customers use CALUMO for a broad range of topics including standard/enterprise reporting (94 percent), ad hoc query (94 percent), budgeting/planning (85 percent), financial consolidation (79 percent), dashboards/scorecards (76 percent) and basic data analysis (64 percent). 70 percent of respondents plan to use it for advanced analytics in the future. CALUMO targets mid-sized companies and large corporations across all industries. 52 percent of our sample of CALUMO customers come from mid-sized companies (100-2,500 employees) with a median of 50 users, but the mean of 262 users indicates there are also some larger implementations.

CALUMO is geared to business power users with broad functionality for various analytics and CPM tasks. Typical tasks carried out with CALUMO by business users include analyzing/exploring data (100 percent), viewing reports/navigating dashboards (97 percent) and creating reports/dashboards (88 percent), which demonstrates the feature-richness of the product. Customers achieve an average of 17 percent usage penetration among all employees, which is marginally below the average for all products of 18 percent. 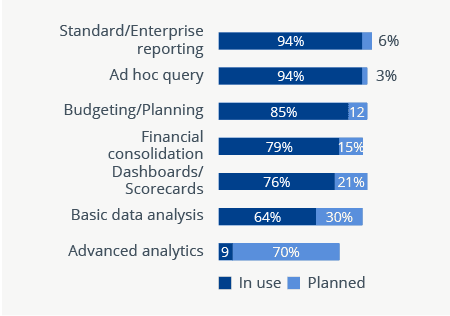 5 products most often evaluated in competition with CALUMO 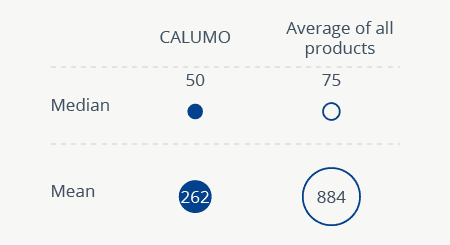 Tasks carried out with CALUMO by business users 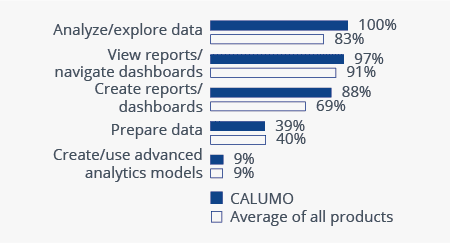 BARC’s Vendor Performance Summary contains an overview of The BI Survey results based on feedback from CALUMO users, accompanied by expert analyst commentary.